In the morning of January 14, 2000, Dutch artist Fiona Tan (b. Pekan Baru, Indonesia, 1966) gathered fifty large red helium-filled balloons, affixed their strings to a harness and was briefly lifted into the chilly winter air above Amsterdam’s Sarphati Park. The activities were photographed and filmed by her assistants as well as by some press photographers. She drew the attention of passers-by walking their dogs and/or their children. Tan: “This was a dream I have had for a long time, ever since childhood, in fact.”

In Het Parool newspaper, Tan was quoted as saying, “The balloons make me go upwards. They are lifting me up.” Her flight was recorded for posterity by a professional film camera and a simple video camera.

The flight was successful; earlier Tan had worried whether the fifty helium balloons would be enough to carry her 50-kilo body, but they did. At times she was as high as 5 metres above the ground.

After a few short flights, Fiona returned to earth, loosened the balloons and handed them to the surprised onlookers. 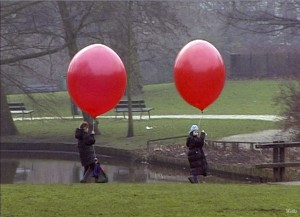 The event, seemingly inspired by the final scene of The Red Balloon, was a work of art. More specifically, it was the basis of a “film & video installation colour, silent digital betacam safety master, dvd, 16 mm filmprint, monitor 14 inch, dvd player, table, film projector 16 mm, no-rewind, electronic sensor, white projection screen”. As such, it became part of Tan’s solo exhibition at Paul Andriesse Gallery, Amsterdam, in September-October 2000. An image of Tan in flight was also made into a silkscreen print (108 x 64 cm); selected black & white images were on display as well. 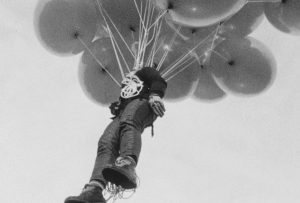 Art critic Douglas Heingartner wrote in Frieze:
“Lift (2000) . . . was well documented, yet only a few stills of Tan suspended in mid-air were included in this show, alongside several freeze-framed images of children with balloons. By encouraging the viewer to imagine their own version of her flight, Tan addresses the fragmentary nature of memory. Think, for a second, of a long-lost friend: the image in your head probably isn’t a film loop or video, but rather a still frame, blurry around the edges, perhaps a bit shaky, like a videotape on pause. The stills from Lift are, like our own memories, tentative, tenuous, possibly manipulated. Tan doesn’t withhold the registration of the event; she simply presents one version that requires more input.”

Fiona Tan told an interviewer that she “wanted to make an uplifting, hopeful work. Suddenly I had the image of flying with balloons. Around 1900 everyone seemed obsessed with photographing and filming the first experiments in flying. There exists an odd film of a tailor who jumps off the Eiffel Tower with home-made wings attached to his arms.”

Jacquine van Elsberg, writing in Skrien magazine, was the only reviewer mentioning the project’s references to The Red Balloon.