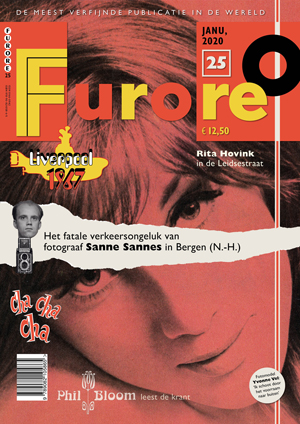 English articles:
• ‘Liverpool 1967’ – Preparing for this animation of the song ‘Eleanor Rigby’, Yellow Submarine animator Charlie Jenkins went to Liverpool to photograph bleak and sombre streets, alleys, pavements, walls and buildings. The hundreds of black and white pictures, taken in late 1967, show a city frozen in time, before entire neigborhoods were obliterated by decay and/or redevelopment. Piet Schreuders maps Jenkins’ journey through Liverpool and compares his photos to the scenes in Yellow Submarine.
• ‘The Flash at the Armory’ – In homage to recently deceased Elvis conaisseur Ger Rijff (1951–2019) we publish his article about the photo session by Bill Robertson from July 31, 1955, taken during the Elvis Presley concert at Ft. Homer Hesterly Armory in Tampa, Florida and resulting in the classic photo cover of Elvis’ first LP.
• ‘As pretty as a poster’ – In another flashback to 1967, Jennie Dingemans reviews the latest fashions in male and female knitwear.
• ‘You Are the Plastic Ono Band’ – A 1969 full-page newspaper ad for John and Yoko’s first single, ‘Give Peace a Chance,’ reproduces a page from the 1967 London phone directory – with some subtle changes and in-jokes.
• In ‘Een Deur Moet Open Of Dicht Zijn’ Mark Lewisohn reveals the location of a famous Beatles photo from 1963 and Art Chantry wonders whether Mary Tyler More posed for some ‘Cha-Cha-Cha’ LP covers.
• ‘Where They Jumped (Encore)’– As follow-up to his article in our Beatles Special (2019), Andre Barreau presents a newly found aerial picture which reveals, beyond a shadow of a doubt, the exact location of the Beatles’ Twist and Shout pose as photographed in 1963 by Fiona Adams.

Dutch articles:
• Erotic art photographer Sanne Sannes (1937–1967) perished in a dramatic car accident on March 23, 1967 in Bergen (North-Holland). What were the circumstances? How did it happen? Who else was in the car? Bob Polak investigates.
• Dutch singer Rita Hovink (1944–1979) was mostly known through her popular Dutch repertoire, but she also made two albums with international jazz standards. Frank Jochemsen, responsible for the recent re-release of her debut album Love Me or Leave Me (1969), describes his fascination for the singer and his efforts to promote Rita’s status as a great jazz vocalist. EXTRA: Which shops in Amsterdam’s Leidsestraat did Rita pass in her 1973 video clip for ‘Blues in the Night’?