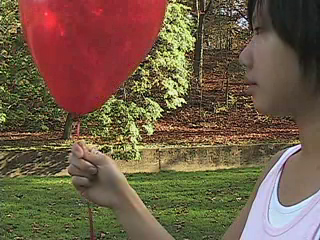 Scope, a 40-minute experimental short by Corey Smith, can be viewed (and downloaded) here. It has nothing whatsoever to do with Albert Lamorisse’s original except for the fact that a red balloon plays a modest part in it.

“Scope, a series of five experimental music videos, starts from the end of a story and moves its way back, explaining the plot from minimal and maximal vantage points. Because of this, the storyline seems unexplainable until the final three minutes in “Tiddler”. Combining these contrasting points of view to create a sense of confusion, Scope incorporates music to add to the bipolarity of these shots, like going from calm, soothing mathematically precisioned timed music box chimes to raw, random mechanically produced noises, all from album with the same name by composer Nobukazu Takemura. Scope’s goal is to show another way that a story can be told, and in the end, Scope is definitely not for everyone. However, those who are patient will certainly appreciate its beauty and theory of repititon and synthesizing.”

A viewer commented, “I didn’t find this film to be anything but a bland waste of my time… After watching this, I realized: life is short, do the best you can with your time on Earth, and do yourself a favor: don’t watch this film.”

Flora Kwong . . . . . . . “Girl” in “Balloon”, “Icefall”, and “Tiddler”
All storyboards, filming, editing, and directing by Corey Smith
Music from the full-length album Scope by Nobukazu Takemura
Courtesy of Thrill Jockey